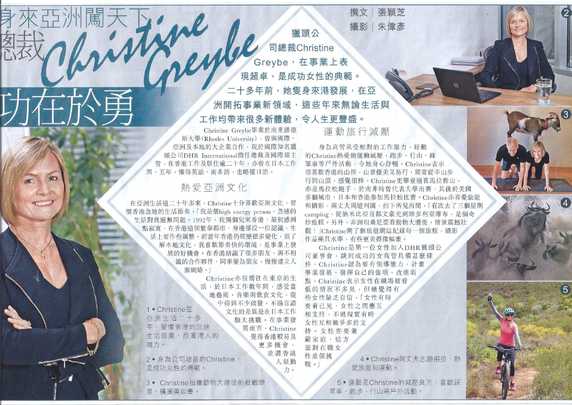 Christine Greybe, president of executive search firm, DHR International, has a proven track record in her career and is a role model as a successful woman. More than two decades ago, she came to Hong Kong alone to develop her career in a new field in Asia. Over the years, both life and work have brought her many new experiences, which have made her life more abundant. Christine Greybe graduated from Rhodes University in South Africa. She has worked with international, Asian and local, big companies. She is currently President and Head of International for DHR International, a globally renowned executive search firm. She has worked and lived in Hong Kong for over 20 years, and also worked in Japan for four to five years. She is fluent in English and Afrikaans, and she speaks a little Japanese.

After living in Asia for more than 20 years, Christine likes Asian culture very much and is used to the rapid pace of life in Hong Kong. “I am a high energy person, and I have no problem with a fast-paced life. In 1992, I came to Hong Kong alone, and I felt lonely in the early days. In bustling Hong Kong, I did not know anyone, and I had to make adjustments to my life. In those days, many changes were taking place in Hong Kong. It was necessary to understand the local culture. I liked the fast-paced environment. It is a good opportunity for career development. I have made many friends in Hong Kong. I became friends with my business partners and colleagues, and I built my network gradually.”

Christine also misses the life in Tokyo. She worked in Japan for a few years, and experienced local art, music and food culture which gave her lots of inspiration. However, the cultural difference and the local language was a big challenge when working in Japan. In terms of career development, Christine believes there are more opportunities in Hong Kong, and Hong Kong people are very hard-working.

Sports and travel to decompress

As a senior executive with relatively high work pressure, Christine loves to do sports to relieve stress. Running, hiking, cycling and other outdoor activities makes her feel comfortable in both body and mind. Christine said she likes the mountain trails in Hong Kong. The mountain views are beautiful and it is easy to walk along the trails. Christine often walked from mid-levels to the peak and felt great. Christine even climbed the Himalayas and she was also a marathon runner. She used to represent her university in running races in South Africa, and she participated in marathons in several cities in the United States, Japan and Hong Kong. Christine also loves travel and photography. She has traveled with her husband to many countries and taken photos of what she’s seen. “I once joined a three-week camping trip, from Namibia’s capital Windhoek to the Victoria Falls. It was a wonderful journey. And the great migration in Tanzania was spectacular!”

Christine has opened a travel blog to record every journey. Her photography works are of very high standard, and some are as beautiful as paintings.

Christine was the first female to join DHR’s board. When it came to the criteria for successful female executives, Christine believes that leadership, planning of career development, focusing on strengths and improving one’s weaknesses are important. Christine said it’s rare to see females belittled in workplaces, but she thought that some women lacked self-confidence. “Women sometimes need to have their own opinions. Women should support each other, but in reality, women sometimes compete with each other more than provide support. It’s a challenge for females to balance between work and family.”