How Did the Median Asset Mgmt Worker Fare in 2019? Depends on the Firm

The typical employee at most publicly traded asset management firms got a raise last year, but at about a third of firms, pay went down despite the still buoyant markets.

Out of a group of 23 publicly traded industry firms, including traditional asset management companies, banks with an asset management subsidiary, and private equity firms, 15 increased median pay last year, while eight lowered pay for the median worker. Overall, for the group of managers, median pay rose an average of just 1.3% in 2019. 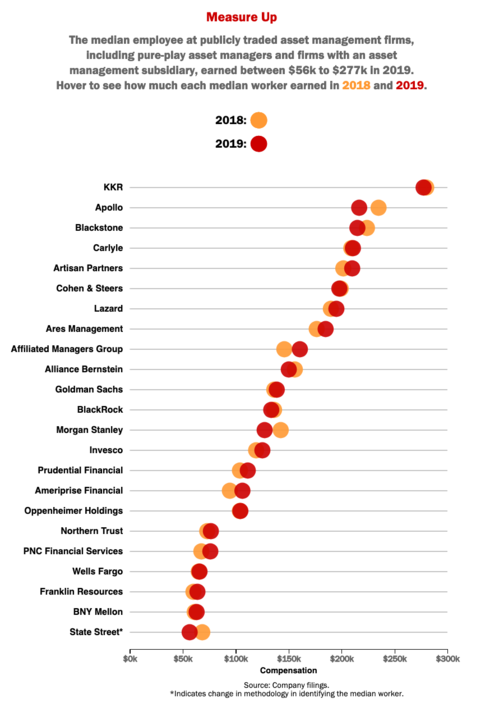 While the markets were strong in 2019, longer-term trends in the industry pushed median pay down for some firms, consultant say.

“It had a lot to do with money flying from the active players into the passive players and in higher-fee products into lower-fee products,” says Larry Lieberman, senior managing director at Orion Group.

Branthover predicts that the current market turmoil will bring a change in asset manager pay structures. Base salaries will likely remain the same to be competitive with the market, but the structure of bonuses at asset managers may change, she predicts.

“Going forward, we’re going to see more of a mixture in bonuses of equity and cash.” says Branthover, adding that bonuses will be used more than ever to retain top talent.

“When things are volatile, companies recognize the high potential of superstars, and they do what they can to retain them,” Branthover adds. “That means bigger bonuses and more equity.”

However, the outlook could be gloomier for the average asset management industry employee.

“This is a time when, if you’re average, you have to worry,” says Branthover.

While median pay for some firms trended downward, the methodology to find the median worker can vary from company to company. For instance, while Ares Management included all employees in its calculation, including all full-time, part-time, seasonal, temporary, and non-U.S. workers, Morgan Stanley did not include independent contractors and leased employees in its calculations, which could push the company’s median pay upward.

At State Street, median pay fell 17%, a decline at least partially driven by a change in the company’s reporting methodology. State Street changed the way it identified the median worker to exclude health benefits in compensation “because the value of health and welfare benefits paid by State Street can vary significantly, depending on the employee’s annual benefits elections,” the company said in a filing.

Across the broader financial industry, median pay fell very slightly. The median employee pay for Russell 3000 financial companies was $65,736 in 2019, compared with $65,808 in the previous year, according to Equilar.