Hongkongers are reaping the benefits of a revolution in banking services, even before the first virtual bank kicks off

Hong Kong’s first virtual banks are not expected to be operational for at least another month, but banking customers in the city are already reaping the benefits. For the first time in about two decades, eight of the special administrative region’s largest banks will no longer charge fees for failure to maintain a minimum monthly balance.

HSBC, one of the city’s three currency-issuing banks, kick started the movement and announced in June it would scrap the fees starting August 1. The award of eight virtual banking licences since March may have had something to do with the change of heart.

“HSBC needs to act now to persuade its millions of customers to stay on, or many of them may opt for joining the virtual banks, which do not charge a fee for small depositors,” Ben Kwong Man-bun, director at brokerage KGI Asia, said at the time. 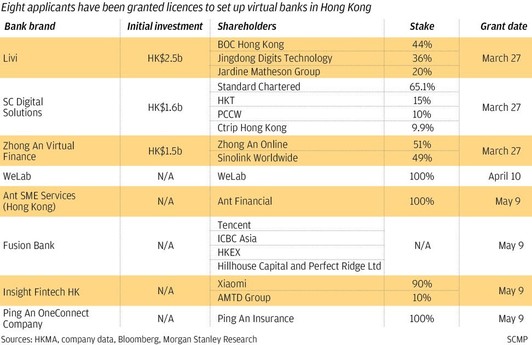 The minimum balance fees, introduced in 2001, allowed banks to recoup costs following a change in rules that let them freely compete for deposits and lending by offering different interest rates. The fee has long been criticised as a penalty on small but loyal depositors.

“I have paid the minimum balance fee from Day 1, when HSBC started charging me in 2001,” David Wong, a white-collar professional, said. “As a small depositor, I had no choice but to pay the fee, as I needed the banking services. I am happy to see the arrival of virtual banks has forced the big players to scrap it.”

Millions of small depositors like Wong have had to pay for basic banking services over the past about two decades, with fees ranging from HK$50 (US$6.4) to HK$100 a month if their bank balance falls below HK$5,000-10,000.

Virtual banks, on the other hand, have been banned by the Hong Kong Monetary Authority from charging any such fees, a move that is expected to keep traditional players on their toes as they work to improve their services.

The scrapping of minimum balance fees is also a “credit negative” for traditional banks, as it reduces their revenue and profit, according to Sonny Hsu, vice-president and senior credit officer at Moody’s Investors Service. According to a Moody’s estimate, the removal will reduce HSBC’s annual net profit by less than 1 per cent.

Anil Agarwal, equity analyst at Morgan Stanley, said in a research report: “The recent move by HSBC to waive off minimum balances indicates upcoming pressure. Cost pressure should start soon, as these entities are hiring staff for new businesses, which should cause wage and cost inflation.

“Hong Kong banks have large revenue and profit pools, at about US$45 billion and about US$25 billion, respectively. The competition will rise for liabilities and, hence, revenues.

“This makes Hong Kong one of the largest profit pools for banks globally. But, as a result [of the virtual banking licences], that pool is in the sights of global technology players as a market open to disruption and taking away a share of revenues,” he said.

But the strategy of scrapping minimum balance fees seems to be working – Wong said he would stay with HSBC. “Without the minimum balance fee, it seems there is not much difference between traditional banks’ digital banking services and virtual banks,” he said.

The virtual banks are expected to start operations six to nine months after receiving their licences, which translates as between September and January, although they could ask for more time to build up systems and management.

There are no restrictions on loan and deposit amounts, or the interest rates offered, by these lenders. But the monetary authority does restrict them from using predatory pricing tactics and other aggressive methods to grow their market share.

The cost of running a bank branch in Hong Kong – the most expensive property market in the world – can amount to HK$1 million a month in wages and rent.

This makes loans below HK$200,000 unprofitable, according to a veteran banker. This is why small depositors and small and medium-sized companies do not seem to enjoy good banking services, as banks tend to focus on big-ticket clients.

Virtual banks, on the other hand, cannot have bricks-and-mortar branches, and must use apps, the internet and ATMs to service customers. Their reliance on technology is, therefore, key to cutting costs and keeping smaller loans profitable.

Norman Chan Tak-lam, retiring chief executive of the HKMA, the city’s de facto central bank, has said virtual banks are a key component of Hong Kong’s smart banking push, and that they will facilitate financial innovation as well as enhanced customer experience and inclusion.

“As an entrepreneurial group of companies, we regularly set up new businesses, and each of these requires a new bank account. Recently, we have seen significant delays in the account opening process, which impacts our business efficiency,” Siu said.

Virtual banks, with their emphasis on individuals and SMEs, should offer some respite.

Michael Wang Lan, the chief executive of Bank of China (Hong Kong)-led virtual banking joint venture Livi, said the lender will offer quick approvals as well as new solutions that will make it easier for small business owners to manage finances and grow their business. He said loan approvals would take minutes as the bank will not require paperwork.

Simon Loong, the co-founder and chief executive of home-grown Hong Kong fintech unicorn WeLab, said: “[We] will initially focus on individual customers, which is aligned with the HKMA’s objective of financial inclusion for the retail segment.”

Set up in Hong Kong as a moneylender six years ago, WeLab now has 38 million customers in the city, mainland China as well as Indonesia.

Tencent-backed Fusion Bank will start by providing banking services such as remote account opening, deposits, loans, remittance and other core services. It will target the general public and SME clients.

The virtual banks, much like traditional lenders, will have to meet anti-money laundering and other compliance regulations. WeLab’s Loong said the banks could comply with the law by adopting new technology to control risks.

They will also have to offer higher interest rates on deposits and lower costs of lending to compete, said James Lloyd, partner and Asia-Pacific financial technology Leader at EY.

“[The] overseas experience has shown that customers, whether individuals or small businesses, will be the real winners with the emergence of digital-only banks. The use of best-in-class technology will improve processes across the bank – helping to speed up loan approvals, for example, as well as account opening processes,” he said.

Moody’s Hsu said the average net interest margin of all banks in Hong Kong stood at 1.6 per cent as of the end of last year. He said he believed the competition offered by virtual banks, together with a cut in interest rates from August 1, will narrow interest margins further.

But it will be hard for any virtual bank to become the next HSBC any time soon. According to a report by credit-rating agency Fitch Ratings: “The granting of virtual bank licences would introduce more competition, but it is unlikely to be a significant game-changer for the local incumbents that have been operating in this competitive landscape for many years.”

Hong Kong’s virtual banks, on average, will have about HK$1.9 billion in initial capital each. HSBC, on the other hand, has assets worth US$2.55 trillion.

EY’s Lloyd said: “Most Hong Kong people have bank accounts already, and often have multiple credit cards. They may like to open an account at one or more of the virtual banks to enjoy higher interest rates, or other incentives offered by these newcomers.

“They might not use the virtual banks as their primary or payroll account provider from Day 1, but this could certainly change over time as customer loyalty increases.”

Among the challenges virtual banks will face, perhaps the toughest will be the regulation of use and protection of personal data.

Paul Chen, US partner at law firm Mayer Brown based in San Francisco and Silicon Valley, said lenders that use artificial intelligence and “robo advisers” to market and sell financial products will need to ensure such advice is suitable for individual customers, and that customers’ data is used in an appropriate manner.

Virtual banks will also find that traditional lenders are working towards similar goals.

“HSBC is already a digital bank. Currently, over 80 per cent of our Hong Kong retail banking transactions occur over digital channels such as mobile, online banking, as well as PayMe,” said Diana Cesar, chief executive of the bank’s Hong Kong office.

Citibank did not apply for a virtual banking licence, as it offers “all types of online banking services that a virtual bank can offer”, said Angel Ng Yin-yee, its Hong Kong and Macau chief executive. “Plus, Citi can offer services at our branches that virtual banks cannot.”

Recruitment could be another challenge, as traditional lenders are home to veteran bankers.